Shannon Leigh Rivera is a YA/NA fantasy author. When she isn’t teaching writing classes or home schooling her four children, she’s writing serialized short stories for her fantasy blog and working on her first  novel, Of Rebels and Ruin. Her work can be found in YA Seven Deadly Sins Anthology– Envy and Gluttony editions.

JR: When did you decide to be a writer?

Shannon: I have always wanted to be a writer. Check that, I have always been a writer. I decided after high school, however, to join the military rather than go to college and pursue writing. When I did get out of the Navy, I went back to school to finish my degree.

I think the extra life experiences that I had because of my time in the service have helped to elevate my writing. Going back to school also gave me my creative edge back that I felt I lost when I was in the military. I have always known in my heart that writing was my career choice, even if my mind didn’t agree with me.

JR: I imagine those experiences offer a lot of insight for your projects now. Where would you say you get your ideas?

JR: Dreams are a constant source of inspiration for me, as well. There’s always a ton of information to tease out of them. Do you already know who your characters are when you begin writing or do you let them develop as you go?

Shannon: Most of my characters are based off of people I have met in real life or through research. Not all aspects of my main characters are from one singular person, but the crucial details are rather picked from various people I admire or respect. I tend to flesh my characters out by writing back stories for them. This way I can think about what they like, what they think about the world they live in, and what their internal ‘selves’ are like. I like to know their beliefs and outlooks on life before I start writing stories about them.

Character development, in my opinion, is crucial to a really good story. If you don’t know who your character(s) are before you sit down to write, how will you be able to convey the message of who they are to your audience? Winging it in the planning stages is okay, but when you are talking about writing a full-length novel, you really need to know your characters inside and out.

JR: I completely agree. Unknown characters are unpredictable on the page, and they can get in the way of the story focus, creating a sort of tug-of-war between characters and plot. What can you tell me about your process now? Has it changed since you went to college?

on: For Rebels and Ruin I decided to try a new method of organization to help me prepare for the drafting stage. I have actually been doing novel structuring and outlining, which is something I have never done in the past—ever. It feels weird to sit down and force myself to think about details that I had never considered before.
I am using K.M. Weiland’s Structuring Your Novel and Outlining Your Novel books and workbooks to help me through this process. It has been a real eye-opening experience.

I feel that I have learned more about the process by following the structuring/outlining technique rather than free-writing like I usually do. It takes longer to plan, but when I sit down to do the drafting, I know everything that is going to or needs to happen. 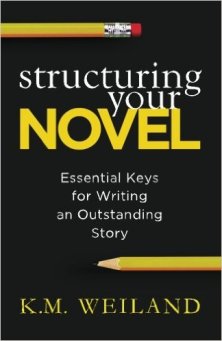 Really, making the skeleton structure for my characters and pre-developing the protagonist and antagonist and all the extra players in the story has been tremendously helpful. However, because it is a new process, it has taken me awhile to get used to it. I think fighting the feeling that I am not writing enough, even though I am planning and doing a lot of labor work ‘behind the scenes’, that has been the hardest part for me this time around.

JR: I know exactly what you mean. A lot of my “writing time” is spent staring at walls and stuck in my head, playing through scene angles. I’d like to hear more about your current project. What can readers expect to see?

Rebels and Ruin is a twist on urban fantasy with elements of sci-fi, mystery, horror, and romance (but less romance than anything else.)  There are elves, but not Orlando Bloom kind of elves as the culture of the elves in Rebels and Ruin (or R&R as I like to call it) is more Asian-inspired. I would say that the factions of elves in the R&R world are much more ruthless than Lord of the Rings characters.

The premise of the first book is that the main character, an elven slave and rebel named Talshae, is sent on a mission to recruit more rebels to join her master’s army so that they can begin to plan the final stages of war against the Emperor. Up to this point in her world, Talshae and the rebellion she works for have been systematically dismantling the Emperor’s political and financial strength. Where the story picks up is at the height of the rebellions power, though they operate more like the NSA/CIA than an open rebellion.  There is a lot more to the story, but that’s the crux of it.

What I love about this series is that I get to use my background to build exciting plot elements, specifically spy rings and military strategies. The characters in my book aren’t your typical heroes and villains. There is a lot of complexity to their actions and everyone seems to have their own motivations. I have spent more than a year developing the characters in the books so they are very real to me when I write them.

Readers should expect a lot of action- fighting and destruction- as well as love-hate relationships, betrayal, and intrigue. My hope is that readers

find themselves immersed in a world that they have never experienced before because I truly believe nothing like this has been done before.

JR: Thank you for letting me into your world, Shannon. I’ll be watching for that book!

One thought on “Planning and Plotting with Shannon Leigh Rivera”

View all posts by jrcreaden